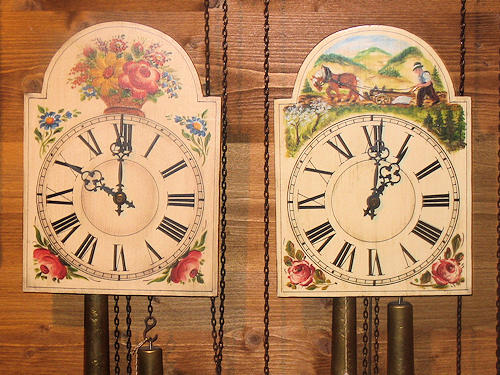 I recently read an article about a Black Forest shield clock called the Butcher Clock or metzgeruhr, and I remember thinking that this is one clock that’s definitely not going to hang on MY wall! But more on that later.

An early design of Black Forest cuckoo clocks was called the schilduhr or shield-clock, which originated in the 1750s. The clocks are quaintly pretty and are making quite a comeback nowadays. Some of the reproductions available are true to the original centuries-old design of a wooden flat painted square face with a semi-circle of painted wood on top which functions as the door for the cuckoo (interestingly, some early models didn’t have the cuckoo in them). All the mechanisms of the original shield clocks were concealed behind their wooden faces because they had no cabinets. Actually, they were considered quite primitive in design because they had no clock cases, no carvings, and no ornamental inlays that are part-and-parcel of the types that came after them.

Another name for this early model was the “wood-wheel paper-shield cuckoo” because the movements and wheels were wooden and the square face had paper pasted on it which was painted with watercolors. Some of the paintings on available reproductions are fantastic if you are a lover of the vintage-look in floral design, landscape, fruits, or figures. The semi-circle generally got the most attention from the painter, with very bold depictions of rose or flower patterns. Something I like about this clock is that miniature depictions of the floral or landscaping themes generally cover the outer corners of the square and inner sections of the dial as well. Shield clocks have dials that characteristically take up a large amount of surface space–certainly much more than they do on most other types of cuckoo clocks.

The schilduhr was at its peak of popularity in the late 18th and early 19th-century probably because they were popularized by clock peddlers who would carry them on their backs and sell them to customers throughout the Alpine regions. In fact, there are many cuckoo clocks that now feature these clock-seller figurines as a nostalgic reminder of their humble beginnings.

Back to the Butcher clock which has a (disgusting) scene of a butcher striking the head of an ox with his ax whenever the clock strikes the hour. I’m not sure what you think, but I infinitely prefer the innocent designs that embellished the original versions of the iconic Black Forest shield cookoo clocks!

An Open Letter To Christmas Lovers

August 24, 2020Christkindl LIVEAn Open Letter to: friends, families, Christmas/holiday lovers, German culture lovers:"While Christkindl LIVE loves all of the Christmas markets around the world, we're an independent platform and are not affiliated nor part of any...

Sarah Mullins’s & WQAD-TV Falsifying Statements Made To Christkindl Live, And Their Illegal Hacking ActivitiesUpdate: This issue has been escalated to our legal team for further investigation. Legal actions may be taken against Mullins or Quad Cities...

A Sneak Peek into Gnome Goodness

Valentine’s Day is just around the corner, and you probably want some decorations displayed around your house. But it’s not that you are bored of the common heart decors and all that, it’s just that you want to add some accents that will give a...

Be the nutcracker prince to your loved one this Valentine Having Valentine’s day around the corner, and most of the businesses closed, being creative in terms of celebration is the only choice. The Notebook, When Harry met Sally and 50 first days are so last season,...

What You Need to Know About Gnomes

If you want to embellish your garden because guests are coming or perhaps you simply want everything to look nice and pretty, adding a few red-hatted gartenzwerg, or garden gnomes is your best option! They might just be statues, but they can surely give your landscape...